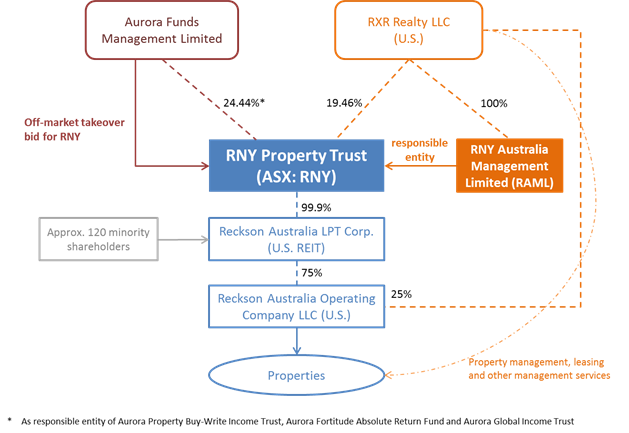 Aurora Funds Management Limited as responsible entity of the Aurora Property Buy-Write Income Trust made an application dated 27 September 2017 in relation to the affairs of RNY Property Trust (RNY).

1 - Unless otherwise indicated, all statutory references are to the Corporations Act 2001 (Cth) and all terms used in Chapter 6 or 6C have the meaning given in the relevant Chapter (as modified by ASIC)

2 - Referring to RNY's Product Disclosure Statement dated 15 August 2005 which provides that Reckson Management Group, Inc (now RXR) is entitled to receive from U.S. LLC a disposition fee of 1.0% of the sale price of any and all assets directly or indirectly disposed of by U.S. LLC, less any fees paid to third parties for the same service

3 - On 18 September 2017, in response to an announcement by Aurora questioning the validity of voting at the meeting, RAML announced that: "RXR (such term includes its affiliates) will charge no selling commission (however described) and will be paid no selling commission. There are a number of reasons for this but the principal one is that RXR waived any such entitlement prior to the despatch of the notice of meeting."

6 - Further at the time of making our decision, other matters had been raised and referred to ASIC that made it inevitable that further disclosure would be required.  See the post-script

7 - See Mungana Goldmines Limited 01R [2015] ATP 7 at [27]: "Where there has been materially deficient disclosure by a party, it is not a satisfactory answer to say that it is open to another party to correct that deficiency by making its own disclosures"