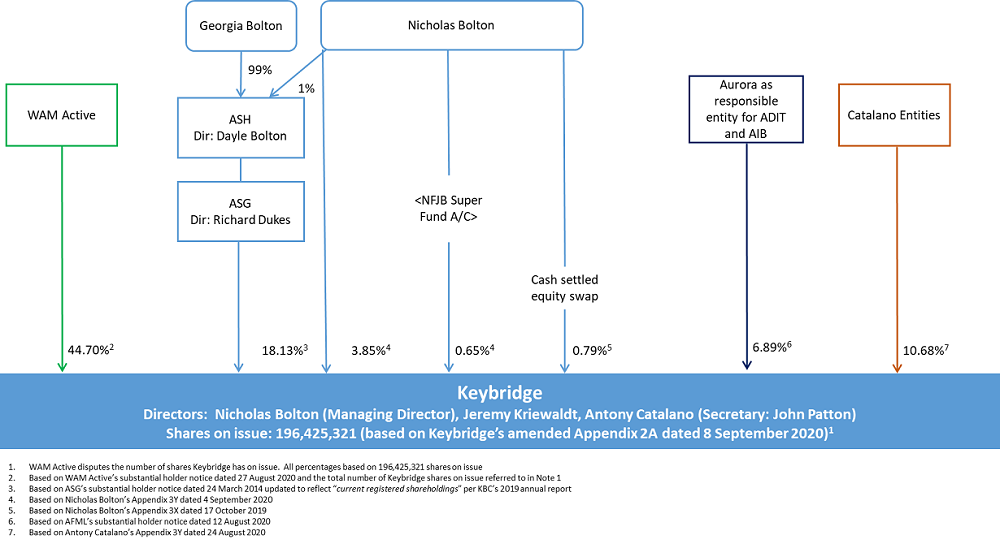 Allegations of contraventions of Division 5A of Part 7.9

3 - Unless otherwise indicated, all statutory references are to the Corporations Act 2001 (Cth), and all terms used in Chapter 6 or 6C have the meaning given in the relevant Chapter (as modified by ASIC)

4 - WAM Active submitted that, further and in the alternative, Aurora had acquired a substantial holding in Keybridge such that “the acquisition of control of KBC is not taking place in an efficient, competitive and informed market in contravention of the principles in Section 602(a), (b) and (c)”

19 - Accordingly, unlike the Panel in Dragon Mining Limited [2014] ATP 5 at [48], we do not consider that we can presume that the relationship between Keybridge and Aurora, and Mr Bolton and ASG, had not changed since Molopo Energy Limited 03R, 04R and 05R. However, similar to the Panel’s observation in Dragon Mining Limited, the allegation here is in relation to Keybridge not Molopo Energy Limited

26 - The last paragraph of s657A(3) provides that “In having regard to the purpose set out in paragraph 602(c) in relation to an acquisition, or proposed acquisition, of a substantial interest in a company, body or scheme, the Panel must take into account the actions of the directors of the company or body or the responsible entity for a scheme (including actions that caused the acquisition or proposed acquisition not to proceed or contributed to it not proceeding).”

31 - Noting that the substantive President referred to the lack of material on this point when he considered interim orders, see paragraph 15(b)